The liner notes of the CD offer a brief description of the tracks, but sometimes a single sentence isn't enough to tell the whole story behind a composition. On this page, you can get more details about the album Moments. See also: Tim's discography page or the Moments CD in the store.
Moments: Behind the music
When I composed my sixth CD, Galaxy, I was secretly composing some tracks for Moments at the same time. I always had a goal to release my seventh CD a few months after my sixth, with no advanced notice or fanfare. In fact, only about ten people in the world knew that this album was in the works. The release date for Galaxy was May 1, and at that point I had composed five of the twelve solo piano tracks on this album. In all, I wrote 24 songs between September of 2014 and August of 2015 to produce the Galaxy and Moments albums.
Title
This album is similar in theme to my album Influence, which was inspired by people and places in my life. The difference is that this album is about specific points of time in my life. I think one inspiration for this title was the brilliant Richard Linklater movie, Boyhood. That film showed that life is made up of moments, but not necessarily the "big moments" — weddings, funerals, births — that are typically discussed in film. Moments was a pretty easy choice for a title of this album.
Compositions
In my first six albums, I had only a few tracks that were under three minutes long; on Moments, there are four tracks under three minutes! Also, this album includes all major-key tracks. So it is reasonably safe to say that this album includes "lighter" and "happier" music than my previous couple of albums.

Moments starts with Beauty, an intentionally introductory-sounding piece. And Then transitions to the three daughter-themed tracks on the album, and the light-hearted Eight-Paw Waltz wraps up the first half of the album. Track #7, as is often the case on my albums, is the most poigniant piece, 11 Seconds. The song Double in the Sun livens the mood a bit, and then tracks 9 and 10 slow things down. The Orange Bridge always felt like a pentultimate track to me, and it fits well in front of the closing track, You Are Here, which has a feeling of finality. As usual, this album includes 12 solo piano tracks, but I added a bonus track for orchestra that is discussed later on this page.
Artwork
Each of the four photos for the album artwork — the disc, the album cover, the back cover, and the liner notes background — was taken by me. These photos share the theme of the music on the album: none of the photos happened at a particularly notable time, but these small moments are now lasting memories.

The cover photo is of my daughter Renée, standing on the beach in Rehoboth Beach, Delaware. Taken just a couple months before I expected to release the album, I knew right away that it would make a perfect album cover. (And somewhat obviously, this is my favorite album cover of any of my albums!) This was an unscripted moment, Renée standing and enjoying the ocean breeze and sun in her face. I reached for the camera and took this shot. 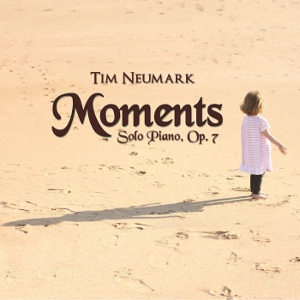 Track 1: Beauty
Origins and Title
In my life there is beauty everywhere. My wife, my daughters ... it's hard not to smile when I look around my house. This song is for my "three" girls. They are all so beautiful.
Composition
This piece is written in F# major. I was playing around on the piano in F major when I came upon the prominent left-hand pattern, but I decided to raise the key by a half-step and see how that sounded instead. F# major is a key in which I had not composed, so I felt this song was a good time to check it off my list!

The song has a fairly long introduction, easing the listener into the CD. The melody is fairly simple, and meant to be graceful and lovely, very much like my girls! This song is in the familiar verse-chorus-verse-chorus-bridge-verse structure.
Track 2: And Then
Origins and Title
And Then was written and released in November of 2014, but it was never meant to be part of the Galaxy album even though it was written so early. The inspiration for this track was a Google+ post by former Google executive Vic Gundotra. The post describes a man who talked to his daughter every day on the phone. Each call always started with the words "And then?", because he viewed each conversation as a continuation of the previous one. This story was told by the man' daughter at his funeral in March of 2014 after his unexpected death. What pained his daughter most is that there were to be no more "And thens".

At the time I read this post I had one daughter, and now I have two, and maybe that's why the story touched me. I wrote And Then to express my feelings on this story. There's a sweetness to this song, maybe a sadness and yearning, and a little hope. Thanks to Vic for a sad but beautiful story.
Composition
The piece is written in E-flat major. It starts with a two-note phrase that certainly sounds like the words "and then". A verse-chorus-verse-chorus structure, the second verse has a more "rolling" feel than the first verse. After the second chorus, there is a very short bridge, and the song returns to the original mood and first verse, finally ending with more "And thens".
Track 3: Little Renée
Origins and Title
This song was inspired by my daughter Renée, who was dancing around while I was playing the piano. As it turns out, this song is now one of her favorites to dance to!
Composition
As I was watching Renée dance, I thought I should write something for her. So I started with her name: R-E-N-E-E. Clearly the piano has no R or N key, so I got to play around with what sounded best, and I ended up with A-E-B-E-E. After figuring out the notes, then I had to deal with the rhythm: there are five letters, so how can I work with that? Well, I had to go out of my comfort zone and try something new. The result is a song in 10/8 and A major. The sheet music details how this should be counted (based on the LH groupings), but it's pretty much 5+5 or 3+2+3+2 throughout.

This is just a sweet, fun song and I love to watch people move while they listen to the fun rhythm.
Track 4: Daughters
Origins and Title
The origin and the title aren't hard to figure out on this one: it's for my daughters and the joy they bring me.
Composition
This song is in G major, and it's just a short piece at 2:40. It's just meant to sound like pure joy, with a sweet and innocent melody.
Track 5: Waiting for Ella
Origins and Title
My daughter Ella was born late! I had a concert scheduled for the night she was eventually born, and during that day I was pretty sure my wife would be in labor and I wouldn't be able to play. So I sat at the piano and played this tune while we figured out what we were going to do. (I went to the hospital to meet Ella, I didn't make to the show!)
Composition
Similar to Little Renée, I based this song on Ella's name. Unlike Little Renée, however, this song puts the name in the melody (E-G-G-A) instead of in the harmony.

This song is in C major, and it's similar to verse-chorus-verse-bridge structure. There's a sweetness to this melody, but later in the song there's a bit more urgnecy in the way it is played, representing the excitement of getting to meet Ella. The song ends with six notes that recall a "happy birthday" tune. I think the end of this song is sure to be a tear-jerker to many listeners.
Track 6: Eight-Paw Waltz
Origins and Title
The inspiration for this track is the moment that many pet owners experience when they come home to greet their animals. At my house, I can see shadows under the door as my cats walk around anxiously to say Hello. It seems like they are dancing around and jumping up and down with excitement. (They probably want dinner!)